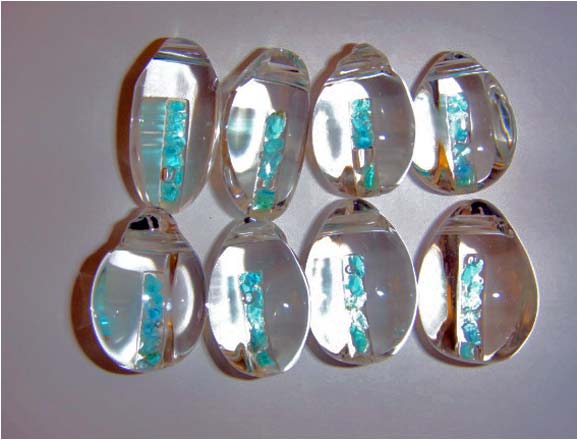 If you browse through the popular books on gem therapy, you will discover that many of them are written under the guidance of various spirit guides, angels, or discarnate spiritual masters. You might have a slight problem discussing and comparing your own ideas and discoveries with the authors of these books, since they are living in a different dimension and not readily accessible to most people.

Primary gemstones for each planet

In contrast, the Vedic tradition of gem therapy has been studied and practiced by millions of people over thousands of years, and there are many knowledgeable practitioners with whom you can study today. In this system, there are primary and secondary gemstones which are associated with each planet. These gemstones have been identified, studied, and widely acknowledged to have a positive, harmonious, healing effect in the areas of life represented by each planet. The traditional, primary gemstones for each planet are:

Paraiba for the planet Mercury

There are secondary, or alternative, gemstones also associated with each planet, which are more commonly available, and therefore less expensive. Usually the primary gemstone is the most powerful remedy for effecting changes in the areas of life represented by each planet.

Because of the great interest in Paraiba tourmaline by Qi-Mag Feng Shui consultants, in this article we will discuss its possibility as an alternative gemstone for the planet Mercury. In Vedic astrology, Mercury represents the intellect, intelligence, brain function, the central nervous system, and communication. Wearing a large, well-cut, high quality, good color, spiritually empowered emerald would enhance all of the areas of life associated with Mercury.

Emeralds are quite rare and expensive, so there are only a few people who can afford to wear large, fine quality emeralds for therapeutic purposes. Hence the search for suitable, and more affordable, alternative gemstones continues.

The state of Paraiba in eastern Brazil is the source of a very rare type of tourmaline, with brilliant turquoise-green colors caused by the occurrence of the mineral copper in the gemstone. The Paraiba tourmaline is very attractive and very rare, which accounts for its high cost. Since the mines are no longer active, the small supply and great demand has resulted in continually rising prices. Now high quality Paraiba tourmalines can cost even more than high quality emeralds.

Since the Paraiba tourmaline was only discovered in 1989, there are no traditional, ancient references to it. We will have to logically and intelligently apply the principles of gem therapy to this new gemstone. We must test to see if it also has a salubrious effect on the areas of life influenced by Mercury. The preliminary research, though anecdotal in nature, is very positive.

There appears to be a strong correlation between wearing Paraiba tourmaline and the experience of higher vitality, a more robust immune response, increased creativity, a feeling of lightness and openness, and marked improvements in the recovery from various ailments. My own observation is that for many people, it is even more effective than emerald for quickly stimulating higher vitality and mental creativity.

When using dowsing rods to test the boundary of the inner aura (pranamaya kosha in Sanskrit), it can be clearly demonstrated by an experienced dowser that the boundary of this inner aura, which typically extends about 0.3-0.5 meters from the body, will grow to as far as 5 to 6 meters from the body. This is an extraordinary change in the size of the aura, a change which typically occurs in a matter of a few minutes, after wearing a quartz crystal pendant filled with Paraiba tourmaline nuggets.

What is even more interesting is that it is not necessary to purchase expensive, fine-gem quality Paraiba tourmaline to realize this benefit. The lower grade, opaque nuggets appear to work quite well in boosting physical vitality. Of course, a large gem quality Paraiba tourmaline would be even more beneficial for meditation, creativity, and spiritual vision, since it would resonate more powerfully with the higher frequencies of the human aura and the chakras.

Dr. Jes T.Y. Lim, in collaboration with various gem designers, has pioneered research and development of Feng Shui and Tao Geomancy tools which incorporate the healing powers of the Paraiba tourmaline. Specially designed tools have been used for self-healing, space clearing, earth cleansing, and even earth-acupuncture. You can learn more about these tools and techniques by attending the various courses on Qi-Mag Feng Shui and Tao Geomancy.

Vedic gem therapy is a fascinating topic by itself, but when new research on the therapeutic effects of alternative gemstones is done with modern subtle energy technologies, then many more exciting discoveries are possible. Plus, the benefits of gem therapy can be made available to a much larger population through innovations in design and distribution.

Stephen Quong is a Certified Qi-Mag Consultant, Senior Master of Tao Geomancy, Life Fellow of the Indian Council on Astrological Sciences, and a Founding Member of the Planetary Gemologists Association.