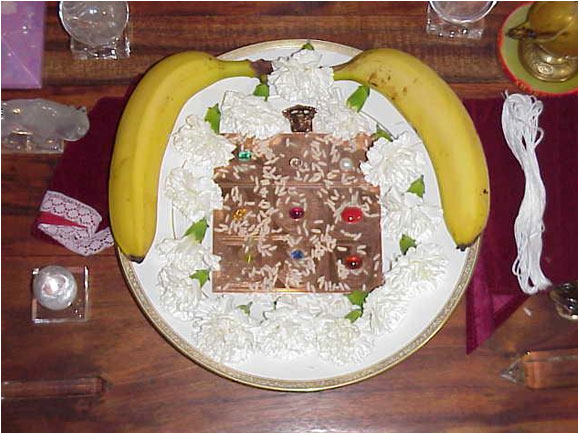 A Short Discourse on Vedic Gemstone Therapy and Gem Elixirs, by Stephen Quong

The word navaratna means "nine gems" in the ancient Sanskrit language of India. The ancient seers of India discovered long ago that certain gemstones could be used in a therapeutic manner for specific types of diseases and spiritual ailments. In fact, certain gemstones were found to have extraordinary healing effects when worn on the body after being properly prepared with mantras, spiritual rituals, and other empowerment processes.

The nine major gemstones used in traditional gem therapy include: Ruby, Pearl, Red Coral, Emerald, Yellow Sapphire, Diamond, Blue Sapphire, Hessonite Garnet, and Catseye Chrysoberyl. These nine gemstones have been correlated with the nine cosmic forces (navagraha) which are used in traditional Hindu-Vedic Astrology (jyotisha). The nine cosmic forces are associated with the Sun, Moon, Mars, Mercury, Jupiter, Venus, Saturn, North Node of the Moon, and South Node of the Moon. The various astrological patterns found in a person's birthchart (janma kundali) which indicate affliction, disease, and other troubles can, to a certain extent, be neutralized by the proper, therapeutic use of gemstones. Hence the popularity of gem therapy in those countries where there is a strong astrological tradition.

The secrets of the science of gem therapy have, for the most part, remained inaccessible to most residents of Western countries. The books which have been translated into the English language deal primarily with the exoteric, or external, aspects of gem therapy. Helping the reader to choose the right type of gemstone for a particular problem appears to be the main goal of the authors. The authors do not make much mention of the esoteric, or hidden, aspects of traditional gem therapy, which involve complex Vedic or Tantric rituals and empowerment ceremonies of a quasi-magical nature. That knowledge remains withheld from public knowledge, and has traditionally been reserved for those who are fortunate enough to receive personal instruction in this knowledge from a living Master, in the tradition of guruparampara, wherein private, oral instructions are given from teacher to disciple. Only those who are deemed qualified for such knowledge (adhikara) are given "secret" knowledge by the Guru. Those who have not been initiated into this knowledge can only guess at what is really happening at the psycho-spiritual level, during the empowerment ceremonies and rituals.

The true potential of the therapeutic usage of gemstones has not been realized in the West, due to another reason--the materialistic orientation of popular Western culture. There is a common and popular idea that anyone buy a book on gem therapy, go to a jeweler, select and purchase a certain type of gemstone, wear it in a haphazard manner, and thereby neutralize some of their "bad karmas" from past lifetimes. This approach has much appeal to those who have no time or interest in traditional spiritual practices like Yoga, mantra japa, selfless service, pilgrimage, and charitable acts. Perhaps these people believe that they can find relief from their past karmas merely by purchasing and wearing an expensive gemstone?

In the Old Testament there is a quotation from a prophet who says that "God is not mocked". There is no easy way out of our predicaments in life. We have to pay our karmic dues, one way or another, and merely spending money on an expensive gemstone may not necessarily change our character, our behavior patterns, or our belief system. We cannot hide behind our material possessions, thinking that they can be a substitute for self-examination and self-transformation. There must be involvement in some kind of a conscious spiritual process, even with gem therapy; otherwise it becomes banal, and ultimately a vain and vapid exercise in pseudo-spirituality.

It is the specific crystalline molecular structure of the various gemstones which provides it with the capacity to store, and even amplify, a certain type of thought-energy. The gemstone itself has no capacity for intelligent thought or the exercise of free will. It requires your input, or someone else's input, in an empowerment process which results it the creation of a spiritual talisman--a living transceiver of spiritual energies programmed to have a very specific effect.

The therapeutic effects of a gemstone are multiplied a thousandfold through the empowerment process of mantra, invocations, spiritual ceremonies and rituals. The imprinting, or programming, of a gemstone with Vedic and Tantric mantras, prayers, invocations, and thought-forms is considered essential for realizing the full potential of gem therapy. Wearing a gemstone without the invocations for spiritual empowerment is somewhat like owning a computer which has no useful software programming on the hard disk drive. You may own something valuable, but you have not realized its full potential yet.

Another popular source of information concerning gem therapy comes through the writings of contemporary "New Age" oriented authors, most of whom channel novel messages from invisible spiritual guides. My concern about these teachings which come from channeled sources is: Who (if anyone) will test and verify these teachings? What is the proof that these new teachings are authentic, truthful, helpful, and beneficial? Only time, testing, and experience will determine the value of these writings. However, my own observation is that most contemporary readers tend to blindly accept what they read, and the more speculative and unprovable a teaching may be, the more likely it is to be accepted as "Truth" by the gullible! What happened to discrimination, discernment, and the "scientific method" of testing hypotheses before accepting them? The scientific method, which has so strongly influenced Western civilization for hundreds of years, is often ignored when the subjects of religion, spirituality and metaphysics are broached.

In India, there is immense respect for traditional knowledge. Knowledge only becomes respectable and part of the tradition of this culture when it has been tested by millions of people over a period of thousands of years. Also, the ancient seers of spiritual knowledge had more credibility than the typical modern writer because of their exemplary qualities of saintly personal conduct, their perpetual engagement in spiritual austerities, meditation, and prayer, and their selfless service to humanity. The traditional knowledge of gem therapy developed by these seers is therefore worthy of investigation by modern aspirants. If the ancient theories concerning gem therapy were not true, the hypotheses would have been discarded long ago. Over time, truth will prevail.

There is one major shortcoming with traditional gem therapy. Because of the expense of the high quality, larger size gemstones which are typically prescribed by traditional gem therapists, gem therapy has remained the domain of royalty and wealthy merchants until modern times. As an example, a one carat flawless diamond would cost upwards of $10,000 U.S., and is beyond the reach of many people. And even now, despite the phenomena of the "wealth effect" of a strong economy in America affecting many strata of society, a significant portion of the population faces financial hardship in their efforts to purchase a high-quality gemstone for therapeutic purposes.

As an alternative to purchasing a high quality gemstone or some other form of talismanic jewelry, the traditional gem therapists of India have developed the complementary science of preparing and prescribing gem elixirs. The energetic quality of high quality gemstones can be scientifically and magically transferred to a liquid solution through a special, alchemical process, and the healing qualities of the elixir can be amplified manifold through mantra, yantra, spiritual rituals, and other empowerment ceremonies.

By consuming a few drops daily of Navaratna Gem Elixir, an individual can derive most of the benefits of wearing all nine of the principal gemstones utilized in traditional gem therapy--and at a tiny fraction of the cost of purchasing and wearing the gemstones in talismanic jewelry. Now people from all economic backgrounds can participate in an affordable form of traditional gem therapy.

We now offer to discerning clients a traditionally prepared Navaratna Gem Elixir. It has been prepared in strict accordance with the Vedic and Tantric traditions:

The Navaratna Gem Elixir is offered for only $39.50 (domestic priority mail postage included in price). It is packaged in a two ounce tinted glass bottle, with an eye dropper dispenser. Instructions are included for ritual use with Vedic Planetary Mantras.

Unsolicited Personal Testimonials: "I used the Navaratna Gem Elixir before my meditation this afternoon. I had wonderful experience in my meditation. Thank you very much. God bless you." HK, Los Angeles, CA

Legal Disclaimer: These statements have not been approved by the FDA, and no health claims are made or implied. The Navaratna Gem Elixir is sold as a nutritional supplement and is not a medicine. Its use is not intended to diagnose, treat, cure, or prevent any diseases or medical conditions. Please consult a licensed and qualified health care practitioner immediately if you have any medical problems.