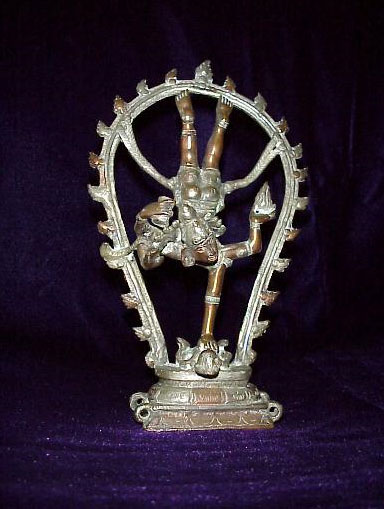 Since the beginning of recorded history, music has played an important role in the religious and cultural activities of India. In addition to being an accompaniment to various sacraments and sacred ceremonies, pure music was composed and performed as a pathway to spiritual enlightenment. Nada Brahma, or sound as an expression of the Divine, is a basic concept in the Vedic philosophy and cosmology. Even the ancient scriptures known as the Vedas, whose anonymous authors have influenced the Eastern world for countless millennia, have always been chanted in strict accordance with specific meters, rhythm, and melodies. Music composed and performed as a form of spiritual worship, was believed to lead to Divine Union, and spiritual bliss.

There have been many renown musician-saints in the history of India, the most famous of which include the Rajasthani princess Meera, who composed myriads songs of devotion to her Lord Krishna; Bhagavatar Tyagarajan, the enlightened mystic poet-musician from Tamil Nadu, and Tansen, who received royal patronage at the court of the Mughal Emperor, Akbar the Great. In addition to the proliferation of spiritual music inspired by classical motifs, there also prevailed a rich tradition of popular and folk music, which voice the aspirations and dreams of the common people, and which make the profound philosophical truths of the Vedas accessible to people from all walks of life.

In modern times, we now see the phenomena of devotional Sanskrit chanting, or bhajan, being recorded by Western musicians and being distributed worldwide. We also have hybrid forms of music, wherein Eastern instruments and melodies are fused with Western musical idioms. For the international audience, the exposure to this "world fusion" music might be their first exposure to music originating from, or inspired by the traditions of India. In this genre, there is a wealth of material to investigate, enjoy, and share.

There is an esoteric, or secret, transmission which comes with the classical/spiritual musical tradition of India. It may come as a surprise to the new listener, that the 27 constellations used in Vedic astrology are correlated with 27 major ragas, or musical scales, each of which have a specific effect upon the human psyche, as well as upon the forces of nature, and the macrocosmic environment. Each raga has a correlation with a color, a fragrance, a part of the body, an energy center (chakra), and with a certain state of consciousness, corresponding with a specific stage in the soul's spiritual evolution.

There are specific ragas associated with a certain time of day, for the six seasons of the year, for the praise of God, for celebration and jubilation, for propitiation of the forces of Nature, for controlling the weather, as well as for the pure joy of creative expression. The classical musician of India could even choose a raga based upon the Moon's placement in a certain constellation, and thereby effect a deep level of spiritual healing for certain types of bodily, emotional, or mental ailments.

Even the Gods of India are intimately involved with the performance of music as a celebration of life. The supreme god of the Hindus known as Lord Siva, is often depicted as the Cosmic Dancer Nataraja, whose dance and drumbeat sustains the physical, as well as invisible universe. The theme of devotional surrender to Lord Siva is very popular in South Indian classical music.

The Supreme Personality of the Godhead, Lord Krishna, is often depicted as a youthful, enchanting flute player, whose seductive melodies recapture the attention of the wandering mind, led astray in its pursuit of worldly pleasures. It is through the sound of music that the lost soul can rediscover its innate connection with Spirit and resume its journey to Self-Realization.

The Goddess of Wisdom, Sarasvati, holds a four-stringed Vina, which symbolizes the divine knowledge encompassed within the Four Vedas, the world's most ancient scriptures. Music, as the Universal Language, can be the medium through which the most profound, unspeakable, subtle truths can be conveyed to all people, regardless of language, culture, religion, and geography.

Sacred music, combined with sacred dance, was intended to create a trance-like, altered state of consciousness, wherein both the musician, as well as the listener, could catch a glimpse of the Transcendental Reality which lies beyond sound. And pure, soul-inspired music was considered to be an expression of the living Spirit of God, and God mystically embodied by music itself.

When we listen to inspired performances of the classical music of India, whether it is from the Northern School (Hindustani) or the Southern School (Carnatic), we are likely to be caught up in a dreamlike reverie, where notions of time and place dissolve, magically, through the sound of music, and at least temporarily, we can be reunited with the universal Spirit-the True, the Good and the Beautiful (Satyam, Sivam, Sundaram). Such is the heritage, and the promise, of the classical music of India.

Stephen Quong has been studying and practicing Vedic Astrology for almost 40 years. In his many travels throughout India, Nepal, and Sri Lanka, he came into contact with many great spiritual teachers, mystics, poets and musicians, who transmitted to him a deep understanding and appreciation of the beauty of life as seen through the eyes of the seers of the East . He can be contacted by email at smquong@gmail.com.